Warning: There is extremely bad language in this video clip.

Warning: There is extremely bad language in this video clip. This video was made outside of Planned Parenthood in Phoenix. Jeff Durbin was outside of PP filming for a special announcement about our fight against abortion in our nation. While we were in the middle of filming, a woman stopped her car in the middle of the road and began to engage Jeff asking what was going on. 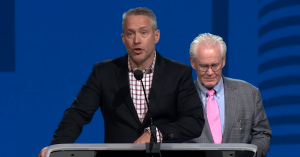