In modern evangelicalism there are a list of approved sins a Pastor may criticize openly without fear of stirring the pot. Think racism. This is an easy sin to preach against because nearly all people in our culture already agree that it is a wicked thing. But, things like the brutal murder of unborn babies is not on this list. In the case of abortion, condemning it from the pulpit is akin to speaking negatively about sodomy. In order to do so, one must first endlessly qualify it and talk about their personal experiences with people caught up in such lifestyles and how they even have friends who are homosexuals. They wax long on talk of “love” and the need to understand those whose sin has left them brokenhearted. However, they will not speak about the culpability of the sinner and the shamefulness of such practice, nor condemn the root of the matter which is a heart set on what is contrary to the will of God. Many Pastors today are simply ashamed of the words that the Holy Spirit has inspired when it comes to addressing things that the Bible calls degrading passions. Sure, they affirm Biblical inerrancy and even the authority of Holy Writ, but practically they are in full agreement with a rebellious world that calls this kind of language hate speech.

Mark 8:38-38 For whoever is ashamed of me and of my words in this adulterous and sinful generation, of him will the Son of Man also be ashamed when he comes in the glory of his Father with the holy angels.”

Men of God should not be taking our cues from a wicked, adulterous generation as to how we address these things. Unfortunately, for many Pastors today this is largely the case. They have limited their commentary on the topic of abortion to one sermon every year on Pro-Life Sunday. When they do talk about abortion their desire is to be as gentle and gracious as possible for fear of turning women, particularly post-abortive women, away in condemnation. While well meaning, this results in a softening of the language in the attempt to be more known for “what they are for, rather than what they are against.” They will say things like: “women who have aborted their children already know they are sinners, they don’t need Christians telling them that! They need to know that God loves them in spite of what they have done.” As someone who has spent hours ministering outside of abortion clinics, I can tell you that a great number of women who show up to pay a butcher to assassinate their baby profess to know Jesus and are fully convinced of the “love of God.” This acts as the very justification for why they are doing it in the first place. They are actually so self-deceived as to believe that they can kill their own children because they have been taught that God will just forgive them anyway (Imagine if mothers applied this same reasoning to their newborn). The problem is not the love of God, the problem is the false gospel of self-love that places the autonomy of a fallen creature above the authority of the revealed command of God. God’s law is not a series of “suggestments,” but commandments. This is why when we give our proclamation of the Gospel, the command is that sinners must repent. The call to come to Christ assumes the violation of God’s law and the necessity of turning from sin (Romans 3:19). Jesus is a loving Savior, but he is a Savior who saves us from sin. Sin is lawlessness (1 John 3:4). This is why it is loving to tell people they are sinners and that presuming on God’s kindness does nothing more than store up wrath for them (Romans 2:5). Scriptural examples of Jesus tell us very clearly that he confronted sinners while making it clear to them that he was willing to bear their burdens. We should be taking our pointers from the Lord himself who offers Life while naming transgressions:

Another reason that Pastors stay away from speaking Biblically on abortion is that they say they want to be about the Gospel and not “politics.” Their message is a truncated, private piety that keeps the application of righteousness out of the public square because “we are citizens of heaven,” and after all Christ said that his kingdom was “not of this world.” If the last several decades have shown us anything, it is that when the Bible is made into church book only, God’s standards of morality only apply within the walls of the family and the sanctuary. When this happens, acts of faithfulness such as preaching the Gospel outside an abortuary and holding signs that expose the same unfruitful works of darkness are labeled by these men as radical activism that seeks to entangle the Gospel with politics. It is here that we need to be reminded that the earliest Christian confession was: Jesus is Lord. Make no mistake, this statement has political implications. While the Kingdom of God does not advance by coercion or by the sword (Matthew 26:52), it does advance through the proclamation of the truth, which is the power of God for salvation (Romans 1:16). Christians are to employ the Sword of the Spirit in every realm of life and in every sphere of authority precisely because Christ has all dominion as the Supreme Ruler over all (Colossians 1:16-20). This is a King concerned just as much with justice as he is with salvation (Isaiah 42:1). Earthly kings are commanded to heed His Word (Psalm 2:10-11). All the nations are judged by Him (Psalm 110:6). This is why when they commit detestable practices like offering up their own sons and daughters to false gods, he expels them from the land (Leviticus 18:21, 25). The unrestrained killing of the unborn is just as much a national crisis as it is an individual moral failure. Any society like ours that champions such evil is responsible and must fall prostrate before God in the deepest place of repentance.

How is it that taking a stand against the greatest cultural evil that the church faces today has been labeled as nothing more than political activism? The acceptance and celebration of abortion and thus the state of our nation can be traced back to a common source in order to identify the problem. We have weak leadership and in particular, weak men occupying our pulpits. There are the faithful who will speak up and thunder with the voice of a prophet. However, the more common situation is that of a swamp in need of being drained because it is filled with the stench of cowards who desire to excuse obedience to their King by calling child sacrifice a “political issue.” This is why they mince words and speak tenderly about what God calls an abomination. To be sure, our speeds in dealing with the women at clinics and the woman in our congregation need to be distinguished. There are different speed limits on different roads for a reason. We simply cannot breathe fire on the brokenhearted as we also should not whisper softly to the calcified rebel. The need of the moment provides us with wisdom in this regard. However, we do need to speak the truth and expose what God hates in the hope that he restores sinners. When the pulpits are weak and hard preaching is nowhere to be found, lawlessness in the house of God and in the culture abounds. When the salt is not salty, things spoil. When the light is indistinguishable from the darkness, all is engulfed in night. Let us not continue to buy into the lie that we cannot speak authoritatively on these things and act consistently by taking up this cause Biblically. The culture does not get to hand us our script or our marching orders. Our Lord has already given us the license to do so.

Share on facebook
Share on twitter
Share on reddit
Zach is the father of 3 children and the lead pastor of a church in Kauai, HI. He is also End Abortion Now's Head of Communication, and occasionally writes for their publication. Zach fights abortion as a Christian, with the authority of the Word of God as his foundation. 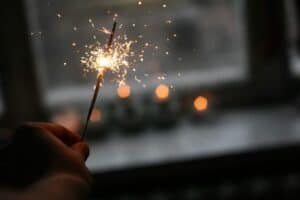 Before we embark on the voyage of the Christian life in another year that God has graciously given let us especially marinate in the resolve of God.