One may interject with the retort that there are many on both sides of this hotly contested debate who don’t appeal to any form of religion or appeal to God in order to make their stand either way.

Those who adopt the Pro-Life and Pro-Choice positions do so from a foundationally religious perspective. Many may interject with the retort that there are those on both sides of this hotly contested debate who don’t appeal to any form of religion or appeal to God in order to make their stand either way. Such a statement on the surface seems to be true, until we examine that both the Pro-Life and the Pro-Choice positions are not simply about who can shout louder or have a more resolute commitment to their cause. The claims of each side assume a view about the nature of all reality as well as a basis for ethics. So if one posits the moral qualities of saving life whilst denying the necessary basis for doing so, that person is seen right away as being inconsistent with their premises (a.k.a. the Secular Pro-Lifer). Likewise, the person who believes in a transcendent being who, as part of his ultimate standard says not to unjustly take human life, and at the same time maintains a commitment to women having the right to do just that, has also embraced inconsistency (the “Christian Pro-Choicer”).

Starting with the Pro-Life Christian who assumes the Biblical worldview and states that abortion is murder, he is asserting answers to the most elementary questions about reality. What is a human being? How ought we to relate to other human beings? Does life have intrinsic moral value, and if so, where or whom does it come from? The Christian answers that the Triune God is the Creator of all life and that we (including the unborn child) are made in His image. He realizes that this same God has given revelatory self-disclosure about how we are to treat one another, pointing to the law of God commanding us not to murder.

These are the same questions to which the Pro-Choice secularist or atheist is proposing answers. What differs are not only the answers, but the implications that flow from how we answer these questions. But the point is, neither position is irreligious. The Pro-Choicer is simply making their faith claims from an evolutionary perspective that presupposes the natural world as supreme. Thus there is no God, no absolute standards of morality, and no case for why we shouldn’t tear our children to pieces in the name of convenience. Again, implications are essential to take into consideration. Both sides put forward an ideology that constitute a social order.

For Pro-Lifers, the fatal mistake comes in denying, or temporarily abdicating our religious pre-commitments for the sake of appearing neutral. We argue instead pragmatically, speaking about the negative consequences of abortion as it relates to a woman’s health, or the scientific certainty that has demonstrated that life begins at conception. As important as these arguments are, many on the pro-choice side already grant them, and yet they maintain their position. This often baffles Christians who cannot fathom why they would still be able to stand their ground.

The reason is that the pragmatic considerations are ineffective in addressing what is ultimately a heart issue, which is to say, a deeply held religious commitment to man’s will as the absolute, which cannot be touched. It is beyond good and evil and unaccountable to any transcendent law. Such a position is not arrived at by scientific inquiry or intellectual rationalizing. It is a position of rebellion against God and is therefore the outworking of a sinful heart. A darkened heart coupled with a futile mind are symptoms of being a son or daughter of Adam. They are evidences that someone is in the flesh, hostile to God’s law and indeed unable to submit to it.

But what comes out of the mouth proceeds from the heart, and this defiles a person. For out of the heart come evil thoughts, murder, adultery, sexual immorality, theft, false witness, slander. These are what defile a person (Matthew 15:18-20).

Therefore, the answer to this conundrum is not to deny our Christian commitments as Pro-Lifers, but rather to firm ourselves up in them and speak to the heart with the truth of the Scriptures, not appeal to the fallen intellect with our cleverly devised arguments. The Gospel message is the power of God for salvation and the only hope for those who love death. It is an invitation for men and women to leave sin and enter into God’s cosmic scope of redemption where there is consistency, meaning and a coherent basis for all of the things of life. We do not win this fight apart from the Word of God, but instead we see victory as we stand on the truth of its contents, and, Lord willing, we will continue to see lives preserved in the process. 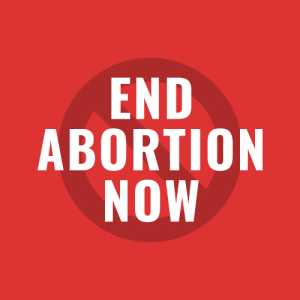