Watch as Dr. James White confronts the Phoenix City Council and shares his thoughts on abortion.

Watch as Dr. James White confronts the Phoenix City Council and shares his thoughts on abortion. He compares the horrors of abortion to that of Nazi Germany by telling the story of the Buchenwald concentration camp in Weimar Germany.

Dr. White then asked the question, “How will history treat us?” Within the borders of the city of Phoenix, more innocent children have been killed than ever were in the Buchenwald concentration camp.

Who is Dr. James White

Dr. James White is the director of Alpha and Omega Ministries, a Christian apologetics organization based in Phoenix, Arizona. He is a professor, having taught Greek, Systematic Theology, and various topics in the field of apologetics. He has authored or contributed to more than twenty-four books, including The King James Only Controversy, The Forgotten Trinity, The Potter’s Freedom, and The God Who Justifies. He serves as Pastor/Elder of Apologia Church in Arizona with Jeff Durbin, Luke Pierson, and Zack Morgan. He has been married to Kelli for more than thirty-seven years and has two children and four grandchildren.

Dr. James White is an accomplished debater, having engaged in more than one-hundred sixty-five moderated, public debates around the world with leading proponents of Roman Catholicism, Islam, Jehovah’s Witnesses, and Mormonism, as well as critics such as Bart Ehrman, John Dominic Crossan, Marcus Borg, and John Shelby Spong. In recent years He has debated in such locations as Sydney, Australia, as well as mosques in Toronto, London, and South Africa.

James White graduated with a BA from Grand Canyon University and an MA from Fuller Theological Seminary. He earned ThM, Th.D. and D.Min. degrees from Columbia Evangelical Seminary.
In 2017, Dr. White began working on a Ph.D in textual criticism at North-West University in Potchefstroom, South Africa. 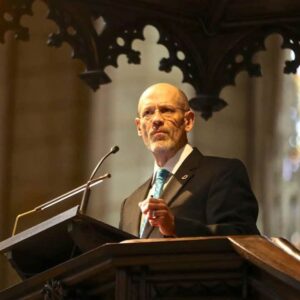 God Kills Babies in the Bible